The promising therapy co-developed at the University of Arizona Health Sciences, while still in the experimental stages, may succeed where other treatments have failed and could be effective against a range of neurodegenerative illnesses in addition to Alzheimer’s.
August 14, 2019 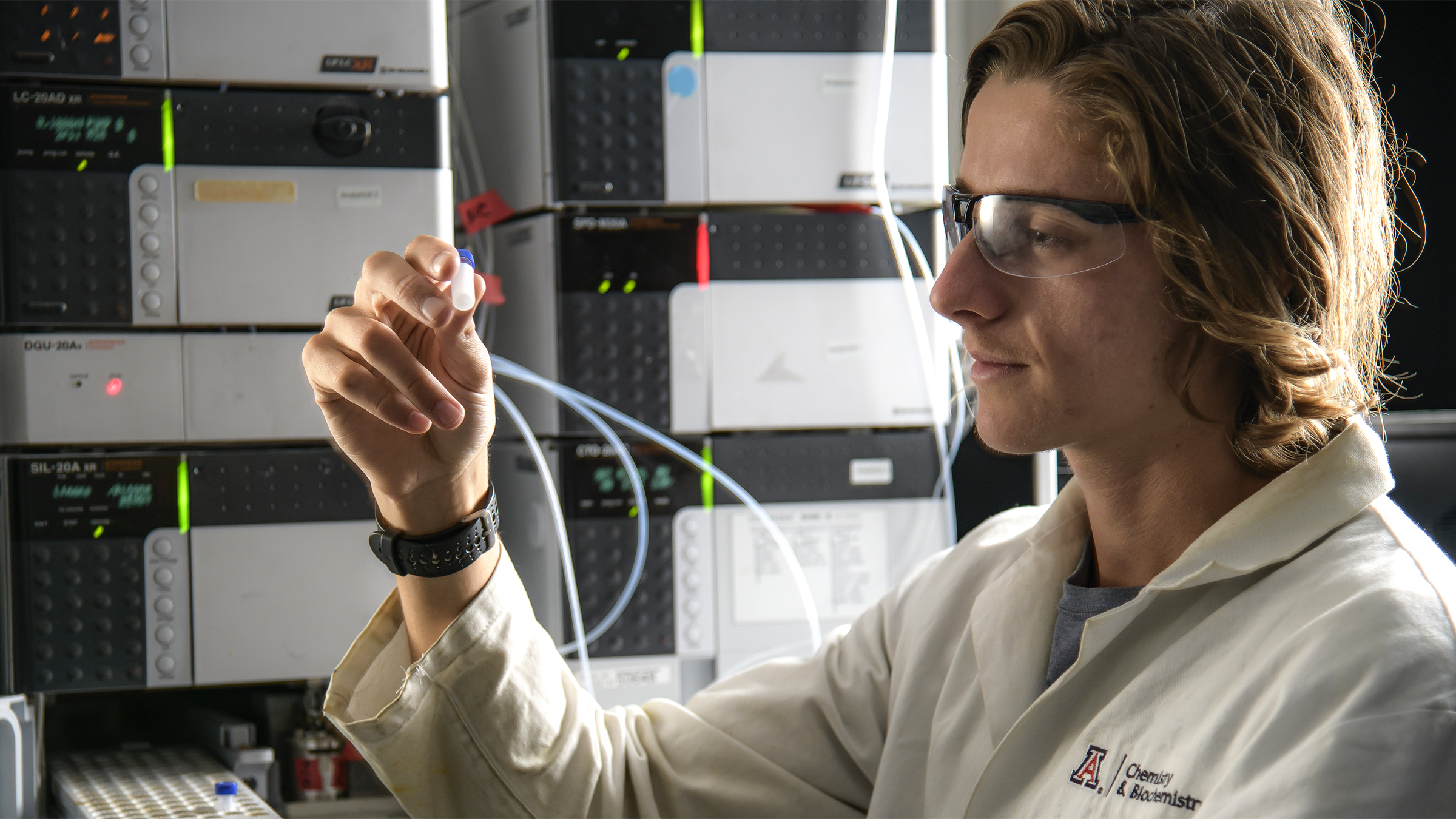 Dementia currently affects nearly 50 million people, striking a new victim somewhere in the world every three seconds. The majority fall victim to Alzheimer’s disease (AD), the most common form of dementia, which accounts for around 75% of cases. Barring major advances in treatment, the number of cases is projected to skyrocket to 131.5 million by mid-century. 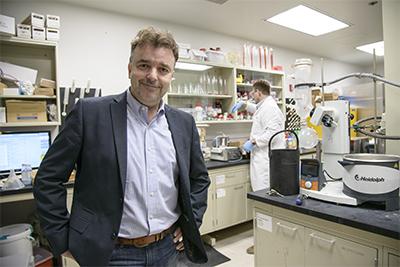 On a more hopeful note, because Alzheimer’s disease is primarily a disease of old age, it has been estimated that a therapy capable of delaying the onset by just five years would cut the number of cases globally by half.

More than a hundred years after they were first identified, two ominous signposts of Alzheimer’s disease remain central topics of research — both formed by sticky accumulations of protein in the brain. Amyloid beta solidifies into senile plaques, which congregate in the extracellular spaces of nerve tissue, while tau protein creates tangled forms crowding the bodies of neurons.

Plaques and tangles, considered classic hallmarks of AD, have been the objects of fierce debate, sustained research and many billions of dollars in drug development. Yet therapeutic efforts to target these pathologies, which are consistently associated with cognitive decline in both humans and animal models, have met with dispiriting failure.

Christopher Hulme, PhD, professor of pharmacology and toxicology at the UArizona College of Pharmacy and medicinal chemist at the Arizona Center for Drug Discovery, and Travis Dunckley, PhD, a researcher at the ASU-Banner Neurodegenerative Disease Research Center, are exploring a small molecule drug known as DYR219. The promising therapy, while still in the experimental stages, may succeed where other treatments have failed, and could be effective against a range of neurodegenerative illnesses in addition to Alzheimer’s.

Rather than directly attacking the visible hallmarks of AD, namely the plaques and tangles caused by the disease’s relentless progression, the new drug acts by inhibiting an early pathway believed to be critical in the formation of both plaques and tangles.

A small molecule kinase inhibitor has shown effectiveness in blocking or delaying the development of plaques and tangles — pathologies caused by accumulations of amyloid and tau proteins in the brain.

Dr. Dunckley says that targeting the early-stage events leading to plaque and tangle formation represents an important advance in the field. If you can block that process early, you can delay the downstream aggregation and formation of the pathologies.

By preventing or delaying the development of AD pathologies, DYR219 or a similar drug may halt the progression of Alzheimer’s in its tracks, before it damages the brain beyond repair.

The new small molecule acts by inhibiting DYRK1, a particular neuroactive enzyme known as a kinase. Researchers like Dr. Dunckley and Dr. Hulme have been studying DYRK1 and exploring its crucial importance not only in Alzheimer’s disease but a broad range of neurodegenerative maladies.

The new study recently appeared in the journal Molecular Neurobiology.

Although the activity of DYRK1 is believed to be a key factor in the formation of plaques and tangles, it is vital to the brain during early embryonic development, where it is involved in a host of processes, including signaling pathways linked with cell growth and proliferation, as well as the differentiation of cells into mature neurons and the formation of dendritic spines essential for the transmission of nerve impulses.

In the mature brain, however, DYRK1’s activities can turn hostile, initiating pathologies associated with Alzheimer’s, dementia with Lewy bodies and Parkinson’s disease. The dysfunction of DYRK1 is also a central feature of Down syndrome. Patients with this condition are highly prone to developing AD early in life, often in their 40s or 50s.

The DYRK1 kinase carries out its harmful role in the brain through a process known as phosphorylation. When DYRK1 encounters a protein known as APP (amyloid precursor protein), it attaches a cluster of oxygen and phosphorus atoms, known as a phosphate group. DYRK1 also phosphorylates tau.

By preventing or delaying the development of Alzheimer’s disease pathologies, DYR219 or a similar drug may halt the progression of Alzheimer’s in its tracks, before it damages the brain beyond repair.

“The reason I’m excited about this, especially in the face of a lot of the recent high-profile clinical trial failures, is that this is really a different approach to treating the disease,” Dr. Dunckley says, noting that previous efforts to target plaques and tangles directly have failed to provide any benefit to cognitive function. “What we’re trying to do is restore the normal phosphorylation of APP and tau, so that you don’t get those downstream pathologies.”

In earlier research, Dr. Dunckley, Dr. Hulme and colleagues showed that using a small molecule drug to inhibit DYRK1 in hybrid mice bred to develop AD-like symptoms reduced the load of amyloid plaque in their brains and improved cognitive performance.

The new study explores early DYRK1 inhibition as a potential preventive measure against Alzheimer’s, with impressive results. “We showed a robust and significant delay in the onset of amyloid and tau pathology,” Dr. Dunckley says.

Researchers speculate that one reason anti-plaque and anti-tangle therapies have shown promise in mice yet consistently failed in humans is the nature of disease progression in the two very different brains. In hybrid mice, plaques and tangles can develop quickly, before AD has caused significant neurodegeneration and cell loss in the brain. Treating plaques and tangles, in this case, can help the remaining healthy neurons resume normal function. In human AD, however, plaques and tangles are typically accompanied by advanced neuronal devastation. It’s simply too late in the course of the disease to derive any benefit from targeting the amyloid and tau pathologies alone.

Connection with Down syndrome

Inhibition of DYRK1 has also shown promise in the treatment of people with Down syndrome. The DYRK1 gene is localized on chromosome 21 in the Down syndrome critical region. Overexpression of DYRK1 appears intimately involved with the cognitive disabilities characteristic of this condition and its inhibition has been shown to improve cognitive performance in mice.

Dr. Dunckley believes a DYRK1 inhibitor like the one described in the new study could first be used to treat pathology and cognitive disabilities in people with Down syndrome, before its eventual application for Alzheimer’s. A preventive treatment might benefit people with Down syndrome who are at increased risk for Alzheimer’s disease, and might slow disease progression in people newly diagnosed with AD.

The ability of DYRK1 inhibitors to halt or significantly delay both major AD-associated pathologies caused by amyloid beta and tau offers renewed hope for effective treatment of Alzheimer’s and may hold the key to addressing other devastating afflictions linked to hyperphosphorylation by DYRK1.

Dr. Hulme expresses excitement about rapid advancements in this area.

“A challenging in-house design effort driven by several University of Arizona graduate students over the last seven years, most recently Christopher Foley, has successfully unearthed newer drugs that are incredibly selective, much more stable and much more potent,” he says. “If such drugs deliver on their early promise, they may eventually be used as a common prophylactic against neurodegenerative diseases, perhaps like current medications for the prevention of heart disease.”