More than 130 fire departments and EMS agencies across Arizona have been trained through the Excellence in Prehospital Injury Care Project, or EPIC.
May 8, 2019 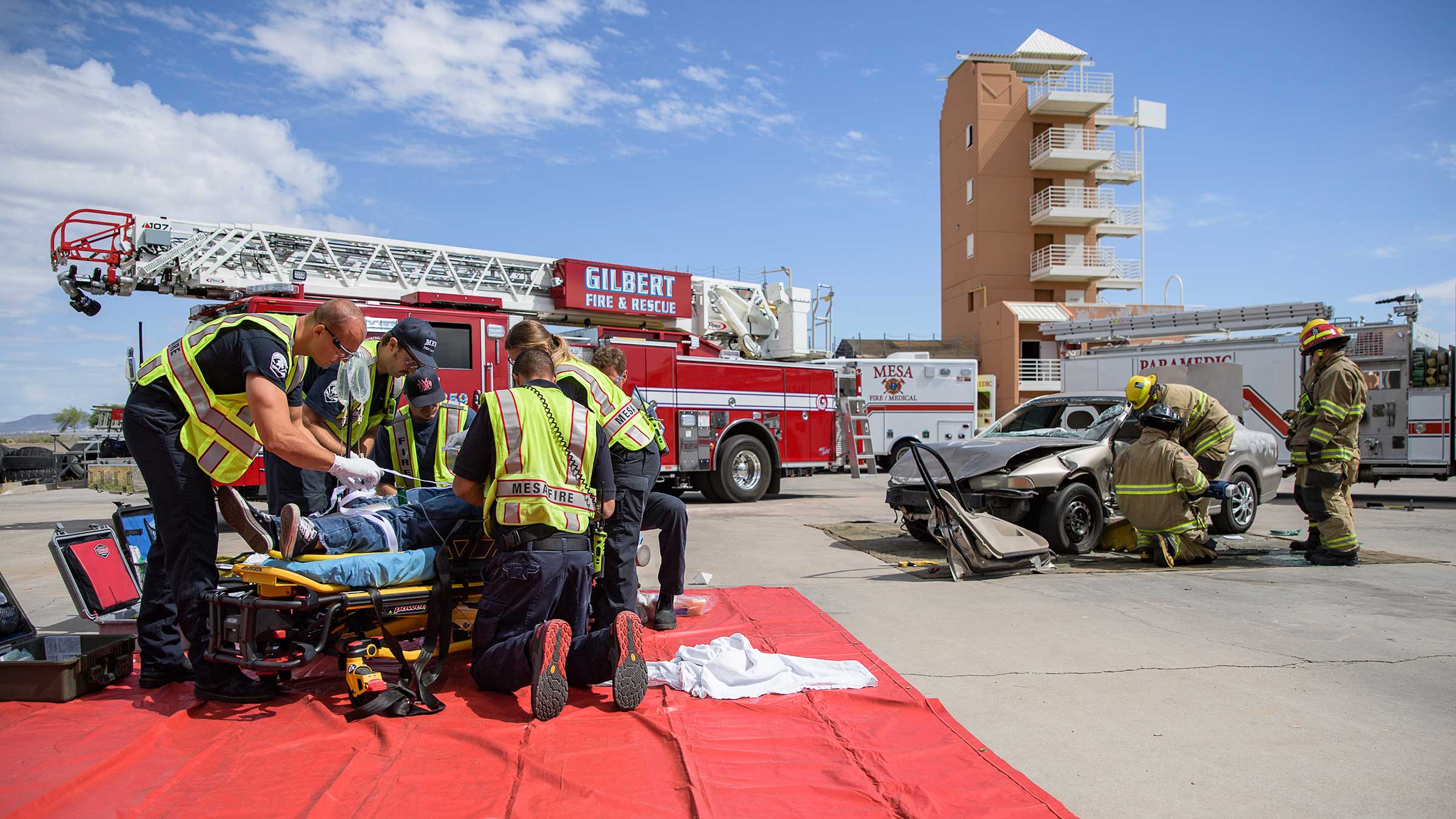 The truck barreled down a Peoria road at 70 miles per hour, smashed into a small family car and spun it around like a top into oncoming traffic, where it was hit twice more. Inside the car, Alex Matthews woke up and turned, searching for her 8-month-old son in the back seat. All she saw was metal. 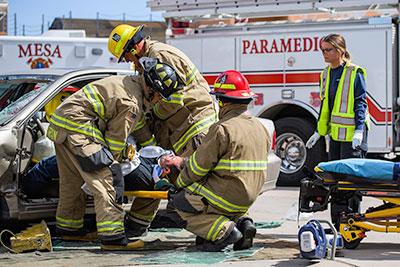 She crawled out of the sunroof and started screaming for her baby.

Seconds later, a man started clearing glass from the car window and extracted the infant from the crumpled heap. The man handed Matthews her baby boy — he was not crushed, but he was not breathing either.

Matthews, who is a firefighter paramedic, switched into work mode — a pulse, no major bleeding, his chest and belly looked fine.

“But when I opened his eyes, I could see them changing sizes. There were dark circles forming around his eyes and blood coming from his nose,” Matthews said. “That’s when I knew it was bad.”

He had a traumatic brain injury, or TBI.

Fortunately, Matthews was one of more than 11,000 paramedics and EMTs who have been trained since 2012 in a new treatment protocol for patients who have a TBI. 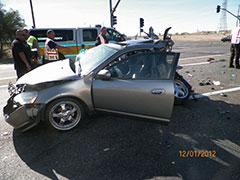 Her training was part of a massive public health initiative called the Excellence in Prehospital Injury Care Project, or EPIC. The initiative was led by the University of Arizona Health Sciences, the Arizona Department of Health Services and more than 130 fire departments and prehospital EMS agencies across the state.

EPIC is the first major prehospital interventional project to evaluate the impact of national prehospital TBI treatment guidelines, which were developed after decades of research but contradicted decades of anecdotal protocol.

When EMS training coordinator Sean Culliney, MPH, first heard the new protocol, he was in disbelief. Everything he was taught to do with EPIC was opposite of what he learned in paramedic school 20 years ago.

“Science has finally caught up. We’re finding the right benchmarks to go after,” Culliney said. “In my 20 years, what I’ve learned has been turned on its head and we’re seeing people live, which is cool because we can share our successes with this next generation.”

The findings have significant implications for the prehospital treatment of severe TBI and supports widespread implementation of the TBI guidelines that could, in this country alone, save thousands of lives annually, said Dan Spaite, MD, professor and Virginia Piper Distinguished Chair of Emergency Medicine at the UArizona Health Sciences. Dr. Spaite was the lead author on the study, which was published May 8 in JAMA Surgery.

“Partnerships like this one are such an important way for the UA to serve Arizona and advance medicine worldwide,” said UArizona President Robert C. Robbins, MD. “Fifteen years ago, the University of Arizona was instrumental in the push to implement compression-only CPR, which has been revolutionary for emergency medicine. I am so proud to see the UA’s excellence in innovation and tradition of improving upon accepted practices continue with Dr. Spaite and his team. This TBI initiative could save countless lives, and I am thrilled by what this will allow our first responders to do for their patients.”

“Arizona is once again leading the nation in managing groundbreaking medical research that will improve how emergency responders treat people with traumatic brain injuries,” said Arizona Gov. Doug Ducey. “Thanks to the work of the University of Arizona, the Arizona Department of Health Services and our state’s entire EMS system, we have made a huge step forward in protecting the lives of people in Arizona and the entire nation.”

Under EPIC, first responders are taught to treat and prevent the “Three H-Bombs”: hyperventilation, hypoxia and hypotension.

As Matthews assessed her baby’s condition, the first thing she did was address his inability to breathe on his own; she began puffing small breaths into his lungs every three seconds.

Prior to the implementation of EPIC, first responders were taught to hyperventilate people with a TBI. Using an air bag with an opening placed over the mouth or directly into the windpipe, medics would squeeze air into the lungs quickly and deeply. Doing so reduces potentially deadly pressure in the brain, which was thought to be helpful.

“In my 20 years, what I’ve learned has been turned on its head and we’re seeing people live, which is cool because we can share our successes with this next generation.”
Sean Culliney, MPH, EMS training coordinator

However, recent research into the link between hyperventilation and brain pressure showed that, during hyperventilation, internal carbon dioxide levels fall and this constricts the brain’s blood vessels. While this lowers intracranial pressure, it also deprives the brain of blood and oxygen.

“We were treating a number,” Dr. Spaite said. “We made ourselves feel better because the pressure dropped, but we did so by taking away blood flow to the brain cells.”

Matthews knew she had to act fast and help her baby breathe normally.

“It was straight to work mode, but on the street corner, breathing for him, I realized, ‘This is mine,’” she said of her child.

The adrenaline from such a stressful situation can distort anyone’s ability to keep time accurately, including first responders.

A medic took over for Matthews, but she noticed that he was breathing her son too fast. EPIC protocol states that the breath rate for children should only be 20 times a minute.

“I reminded him to slow his breathing,” Matthews said.

Research shows first responders naturally tend to breathe patients far too many times a minute, leading to hyperventilation, according to Culliney. Fortunately, the solution was simple: Agencies now use breathing bags with a light that flashes at the proper rate, serving as a visual cue.

By the time the first ambulance arrived, the baby was breathing on his own, and there were many people who needed immediate medical attention, including Matthews’ sister, who had been driving the car. 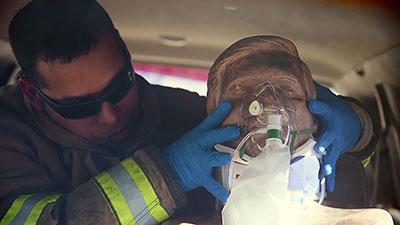 Fortunately, Matthews recognized the crew. As they helped others at this busy crash scene, she initiated an IV into a vein in her son’s leg to prevent another “H-Bomb”: hypotension, or low blood pressure.

The last “H-Bomb” is hypoxia, which deprives the brain of oxygen and kills neurons. To prevent this, first responders are taught to place high-flow oxygen on patients as soon as possible.

As Matthews prepared to intubate her son, a medic stepped in to take over. It was Matthews’ turn to be taken care of.

EMTs and paramedics learn to do these life-saving interventions day or night, in extremely chaotic conditions, in any weather.

“What EPIC found was that the prehospital care is powerfully synergistic with critical care and surgical care in the hospital,” Dr. Spaite said. “If we deliver a person whose brain is going to die, it doesn’t matter how good the trauma team is, we will never get those neurons back.”

Finding meaning in the numbers

The EPIC initiative was different from a traditional research study in a few ways. First, it was not a randomized clinical trial — the current gold standard of medical research.

“We already had evidence that the TBI interventions work for in-hospital patients, but it had never been shown that they can make such a difference in the ambulance,” said Sam Keim, MD, MS, professor and head of the UArizona Health Sciences Department of Emergency Medicine. “But we were so convinced it was the right thing to do that it would be unethical to do a true randomized controlled trial, where we had half with and half without the intervention.”

Instead, the study included a before-training group and an after-training group, while also adjusting for differences within those groups such as age, sex, TBI severity and other factors.

Because it is unlikely that a study of this magnitude will be repeated, the team chose to include a wide spectrum of TBI severity in the effort — moderate, severe and critical. This approach identified that patients with moderate or critical TBIs didn’t see a significant improvement after implementation.

According to Dr. Spaite, “This is likely because the moderate patients had a very low mortality rate regardless of prehospital treatment and the critical group had injuries that were so extreme that no amount of treatment would have saved them.”

The EPIC project has led to a valuable repository of information that will help answer important clinical questions about TBI. The EPIC database is at least 10 times larger than the next largest TBI database in the world that has prehospital EMS data.

Moreover, the linkage of the prehospital data to the trauma center data was 98%. This wouldn’t have been possible without many entities working in tandem.

“To have the Arizona Department of Health Services, the University of Arizona Health Sciences and almost all EMS agencies in the state work together in an initiative, and to supply all the data and to allow us to do all the linkage with the trauma centers and hospitals, is entirely unique in this country,” Dr. Spaite said.

Simple solutions that save lives

“The beauty of EPIC was that it only involved simple interventions. This wasn’t a million-dollar ‘un-obtainium’ drug,” Dr. Spaite said. “The EMS providers already know how to put oxygen on a patient and how to initiate IVs, and how to intubate and ventilate. EPIC simply taught them how to optimize the use of these treatments for maximum benefit to the patients. It’s just those three simple interventions … done right.”

In the hospital, Matthews got a full picture of how seriously her son was injured. His brain was bleeding badly, and he lost movement to the left side of his body. He underwent years of physical therapy.

He’s now about to turn 7 years old. He’s in first grade and likes to play the drums and baseball.

“He has movement, sensation — no seizures or behavioral issues. We had the best possible outcome,” Matthews said. “It’s a miracle we’re both alive, and he’s him.”

“I take pride in my job, even more so now. Every day I go home to a healthy little boy,” she added. “And because of my job, I can give that opportunity to others to have a good life.”